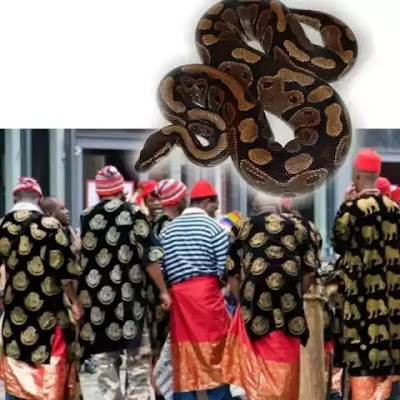 Here's the thing, in most parts of Igbo land, snakes are not allowed to be killed. Eke which means python is worshiped in some communities.
In fact in these communities, it is said that these snakes don't bite, you can play with them but not kill them. They’re considered to be ancestors and forefathers that died and reincarnated.
For example, in Okwudor community in Njaba local government area of Imo state, you don't kill Eke (python) it is a big taboo. If you do, whether it's mistakenly or not, you must bury it like you're burying a human being. There's a burial rites to be done for it.
In the community of Eke-Idemili in Anambra state, you dare not kill Eke (python), there are serious consequences.
In Okija, nobody is allowed to kill pythons instead they play with them.
In a certain community in Nnewi no one is allowed to kill ''eke". It does not bite the people from the village, they are only meant to be played with and pet like babies.
Entertainment Home Lifestyle Local News