Two ladies fight seriously over a man on Vals Day 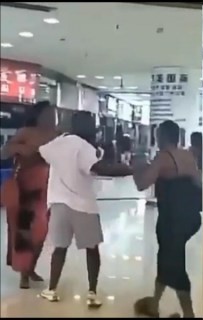 Two ladies were captured fighting over a man on  Valentine's day at a popular shipping mall.
According to reports, the guy left the main chick at home and stepped out with the side chick.

An informant who saw the guy with the side chick at the mall hinted the main chick and she came over and caught them right when they were holding hands and chopppilovve.

The main chick after some exchange of insults decided to teach the side girl a lesson.

The guy became the referee as both ladies started throwing hands.