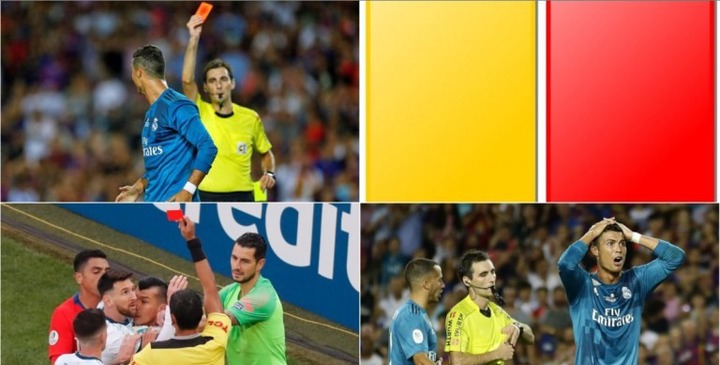 When are they issued?
A player receives a yellow card for committing any of the following offenses:
is guilty of unsporting behavior
shows dissent by word or action
persistently infringes the Laws of the Game
delays the restart of play
fails to respect the required distance when play is restarted with a corner-kick, free-kick, or throw in
enters or re-enters the field of play without the referee’s permission
deliberately leaves the field of play without the referee’s permission
A player receives a red card for committing any of the following offenses:
is guilty of serious foul play
is guilty of violent conduct
spits on an opponent or any other person
denies the opposing team a goal or an obvious goal-scoring opportunity by deliberately handling the ball
denies an obvious goal-scoring opportunity to an opponent moving towards the player’s goal by an offence punishable by a free kick or penalty kick
uses offensive or insulting or abusive language and/or gestures
receives a second yellow card in the same match.
How much does professional soccer players pay for each yellow card and red card they receive during a football match?
They aren’t classified as fines but for every yellow card or red card in football, you usually to pay an admistrative charge to the Football Association that runs the competition for dealing with the paperwork involved.
In England for example, a yellow card carries a £10 fine while a red card carries a fine of up to £30. It is to avoid these penalties that players often ask referees to ommit bookings from their match report.
The charge is the same whether you are playing in a Sunday league competition run by your local FA or in the Premier League.Some clubs may also give in house fines to their own players for cards but that is up to each individual clubs depending on the kind of policy they want to pursue.
This is usually to try and encourage better behaviour as they won’t want players to miss too many matches.
During the match: A player who receives a yellow card may continue to play in the match. If a player receives a red card, he is immediately dismissed from the field of play and can play not further part in the match.
The player who is dismissed cannot be replaced; his team must play the remainder of the game with one fewer player.
Post-match: Although rules vary from league to league, yellow cards and red cards are often accompanied by suspensions.
Generally, one red card results in an automatic suspension of one to three games. Additionally, receiving many yellow cards throughout the season can also result a suspension, depending on the league / tournament.
Entertainment Home Sports