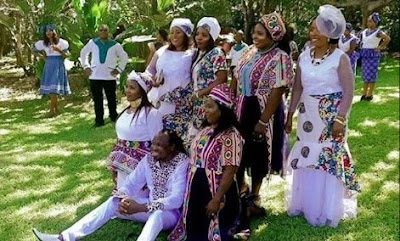 A 50-year-old South African man, Gobela Faniyakhe who hails from Umhlabuyalingana at Northern KZN has caused a massive stir by marrying six women in one ceremony. The current number was supposed to be eight but two of the women indicated to him that they were not yet ready.
The ladies' man further affirms that he would add the two later during the year. According to the 50-year-old, the ultimate dream is to have 14 wives which he is working towards and would be able to achieve this in the near future.
Gobela goes on to say that he spent a whopping N17,081,6445 on the wedding with the six women whose names and ages are Sibongile Zikhali (49), Hloniphile Ndlanzi (26), Celiwe Ndlanzi (26), Nikiwe Khumalo (38), Thandi Khumalo (30) and Zanele Shabalala (49). According to the rich man, all the six wives together with their 21 children would reside with him and in the same house.
Entertainment Home Lifestyle Local News