Boxer destroys the face of fan with punches for jubilating

The Asante Kotoko fan who had his face brutally damaged by the Ghanaian boxer, Patrick Allotey, has finally broken the silence and explained into detail what actually transpired at the stadium.
Michael Siaw, the Asante Kotoko fan while narrating the ordeal on Kumasi-based Oyerepa FM, Mr. Siaw claimed he did nothing to provoke the boxer. 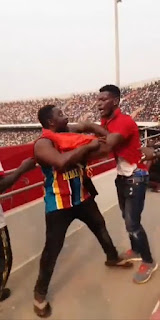 According to him, Patrick Allotey and his team are pushing him to drop the case and opt for an out of court settlement but he is yet to agree on that.
“I didn’t even know he was a boxer, it was after the video went viral that I got to know.”
“Sincerely I did nothing provoking to merit such assault from him, I was only jubilating when Kotoko scored, that was when he approached me to leave his presence and before I realized, he had hit him.”
“His manager and family members have being here that I should withdraw the case so we settle it amicably but am yet to meet my dad so we decide.” 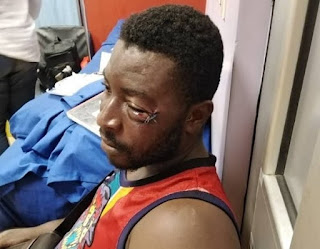