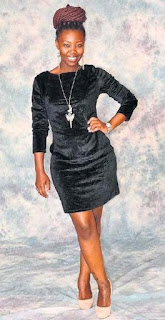 A South African actress is recovering in the hospital after she was beaten beyond recognition by her boyfriend after she kissed an actor in a stage play.
The incident reportedly occurred at the weekend after 30-year-old Londiwe Ngcamu featured in a theatre production Seven Days War, set in the 1980s. She was said to have played the lead role of an IFP woman who fell in love with an ANC member at the Winston Churchill Theatre. 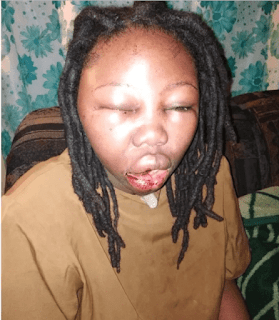 After the show ended at around 10 pm on Saturday, the mother of a two-month-old baby girl and a six-year-old boy met her boyfriend at the bus stop and walked home with him. When they got home, they got involved in an argument before the man attacked her. He banged her head on the ground and used his knee and fists to hit her face as she begged for her life.

Speaking to The Witness from her hospital bed on Monday afternoon, Ngcamu, from Sobantu, said: “We had just come back from the theatre after our performance and I was chilling with my cast members at the clubhouse in Sobantu, where some of our cast members who live far away stay during shows.

“At around 10.30 pm I got a call from home informing me that my baby was restless, so I had to rush home,” she said. Ngcamu said a man was known to her, who cannot be identified by The Witness at this time, had called her and offered to walk her home.

She decided to walk alone for some of the distance intending to meet the man halfway, but when they met on the road an altercation broke out between them and the man then dragged Ngcamu to his home where he beat her severely.

“When we got to his home the gate was closed and he pushed me onto the gate to open it. “One of his friends and [that man’s] girlfriend were there but they did nothing to help me. “They saw him beating me up but stood and watched for a while before they left.

“When we got to his room he threw me on the floor and started beating me. He banged my head on the ground and used his fists and knee to hit my face. He even used the small suitcase I had with me to hit me on my face.”

Ngcamu said at some point the man started punching her and kicking her in the ribs, telling her that he wanted to break them. “I was so scared and kept on begging him not to kill me, but he kept ongoing. It went on for hours.

“When he got exhausted he would lie down on his bed to rest and gather his strength, then start beating me all over again.” The woman said at some point she realized that he had a knife and she tried to grab it.

“I can’t remember what happened to the knife but I have a huge cut on my palm and I think it was from when I grabbed the knife. “He then pulled out an ax and asked me if I would prefer that he used the ax to slit my throat or to cut off my fingers. I thought he was going to kill me. I kept on praying, asking God to spare my life.”

She managed to grab the ax and threw it under his bed. “While beating me up, he was shouting to one of his relatives who was in another outside building that he must help him dig my grave because he was going to kill me,” said the still visibly shaken Ngcamu.

She also added that she made her escape from his house after he went to bed, and rushed to her siblings who took her to the hospital and reported the case to the police. Confirming the incident, police spokesperson Captain Nqobile Gwala, said a case of assault has been opened at the Mountain Rise police station.
Entertainment Home